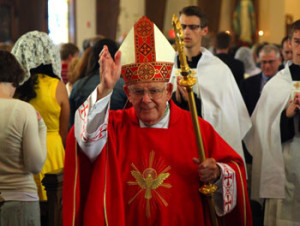 During his homily, Bishop Loverde echoed Pope Francis by encouraging students to take part in the new evangelization with three words: Jesus, prayer, and witness.

“Here at Christendom, you practice witnessing to Christ and for Christ in your interactions with one another,” he said. “Here too, you are being equipped to continue this witness, when you leave the Jerusalem of this place to go to the ends of the earth. Yes, Catholic education is inseparably linked to the new evangelization.”

He encouraged students during their time at Christendom to be “re-evangelized and formed totally as a person created in God’s image and recreated by the death and resurrection of His only begotten Son, Jesus Christ.”

“Encounter this Lord Jesus in prayer and witness to him though love—love rooted in the truth,” he said. 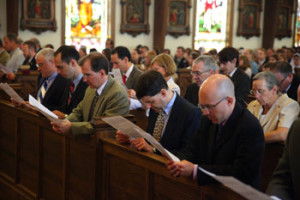 Following the homily, college president Dr. Timothy O’Donnell led the entire faculty in a profession of faith and an oath of fidelity to the Magisterium of the Catholic Church. Christendom remains one of a handful of Catholic colleges in the nation where the entire faculty makes this oath, ensuring that the faith will be taught in its entirety across the various disciplines.

Following Mass, the bishop joined the faculty, staff, and students for brunch in the newly refinished St. Lawrence Commons. Afterwards, O’Donnell addressed the entire college community informing them of recent campus enhancements and the past year’s success in fundraising and admissions.

“Having 157 new students is really quite an unusual phenomenon for us here at Christendom,” says Admissions Director Tom McFadden. “Of the 157, 140 are freshmen who have an SAT average of 1833, and that’s the highest among the past five incoming classes.  Plus, more of them are on academic scholarship than normal. We have very high hopes for this class and I am sure that they are going to be a great addition to our student body.”