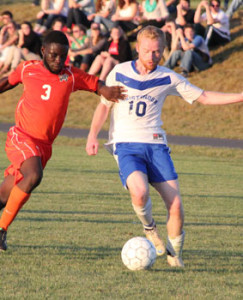 The Washington Adventist University men’s soccer team, the Shock, beat the Christendom College Crusaders by a score of 3-2 during a Crusader home game on Thursday night, September 19.

But the real story is that the Crusaders had the upper hand almost the entire game, scoring first and keeping the Shock on their toes. The Shock, which actively recruits for soccer players – most of whom are from Kenya and Nigeria – for their NCAA Division II sports program, acted as if they fully expected to slaughter the Crusaders, since Christendom is not in the NCAA at all.

The coach and players were frantically yelling at each other throughout the game, seemingly a bit “shocked” that the Christendom Crusaders were staying with them throughout the entire game, and that they were down 1-0 at the half, thanks to a goal by senior Johnny Foeckler.

In the end, the Shock were just too much for the Crusaders, even with a Crusader goal by Joey Kuplack about midway through the second half, but the Crusaders will continue on in their season, now 6-1, and try to win their next eight games before the close of the season. Their next game is against Patrick Henry College at home on Saturday. The Crusaders last game will be an away game at Washington Adventist University on October 16. Maybe the final result will be different this time….stay tuned.