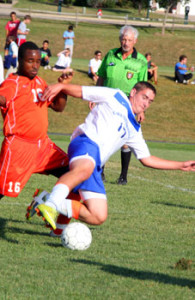 The Christendom College men’s soccer team finished the greatest season in its history on October 16. Despite a loss to USCAA opponent Washington Adventist, the team capped an amazing 11-2-1 season, which included rankings as high as eighth in the national USCAA coaches’ poll. The impressive record features even more impressive stat-lines, including outscoring their opponents by an astonishing 78-14 goal-margin.

“An exceptional sports season is a result of a great many parts working in cohesion,” said Jake Gutierrez, the team’s coach. Gutierrez had a defined system of how he wanted the men to work together, training them in a new and offensively aggressive style of play.

“They learned the system so well, that they were able to execute slight tactical adjustments that I would implement at half-time,” he said. “And our captains Johnny Foeckler and Jon Fioramonti kept everyone moving at maximum speed—physically and mentally. They were so instrumental in keeping the team playing beautifully.”

The only blemishes on the near perfect season were three games against very strong opponents: Potomac State College of WVU and Washington Adventist College.

Considering the size, talent and speed of the Adventist team, the two hard-fought losses in no way diminish their amazing season. The team currently stands with three players in the national top 25 for goals scored this year, including Sean Salmon at #5, Johnny Foeckler at #12 and Joey Kuplack at #21. In addition goalkeeper Tim Vander Woude is ranked the #12 in goalie save percentage.

“For the graduating seniors this year was the capstone of a successful four-year journey,” athletic director Chris Vander Woude said. “They finish with a four-year record of 36-15-3, which included huge wins over Southern Virginia University, Mount Aloysius, and Gallaudet University.”

For more information about athletics at Christendom College, visit christendom.edu/athletics.