St. John the Baptist parishioners and Christendom College alumni Nathan Scott (’10) and Michael Bugin (’12) are working with their local Knights of Columbus Council to host its annual “Vocations Fundraising Dinner,” slated to take place on Christendom College’s campus on January 4, 2014. 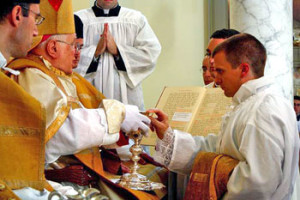 The guest speaker for the event will be Christendom College president Dr. Timothy O’Donnell.

Of the six men studying for the priesthood, Noah Morey is an Arlington Diocese seminarian at Mt. St. Mary’s Seminary in Emmitsburg, Md.; Brian Accettullo is an Arlington Diocese seminarian at the Pontifical College Josephinum in Columbus, Ohio; John McFadden is a Benedictine postulant at Clear Creek Monastery in Hulbert, Okla.; and Zach Akers, Daniel Heenan, and John Killackey are Fraternity of St. Peter seminarians at Our Lady of Guadalupe Seminary in Denton, Neb.

As of November 2013, Christendom College has helped foster 148 religious vocations amongst its alumni ranks (68 priests, 50 sisters, 1 deacon, 2 brothers, and 27 men currently in seminary). Additionally, over the past 35 years, there have been 359 alumna-to-alumnus marriages.

Tickets for the fundraiser cost $50 a person. Seating is limited and may sell out quickly. The tickets are being sold on a first-come, first-served basis. They can be purchased online at the Knights of Columbus council’s website or by contacting Bob Wilson at 540-636-1909 or dnali94@reagan.com.