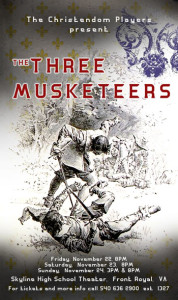 The Christendom Players will present an exciting performance of “The Three Musketeers” on November 22-24. Held at the Skyline High School theater in Front Royal, Va., the play promises to give the audience a dose of swashbuckling entertainment.

Starring as the three Musketeers are senior Andrew Hepler (as Athos), freshman Bren Blackburn (as Porthos), and senior Joe Duca (as Aramis). Christendom English professor Dr. Patrick Keats and professional actress Katie Long will direct the play, which will be the 34th major production at the college overseen by Keats.

Originally written in 1844 by Alexander Dumas, the Christendom Players will be performing an adaptation of The Three Musketeers for the stage written by Ken Ludwig, a well-known and versatile playwright of modern theater.

“His take on the story is highly unusual in its combination of hilarious comedy, intense drama, and exciting fight scenes,” Keats says.

Playgoers will enjoy following D’Artagnan, the young man from the countryside of France, played by freshman Jake Hiserman, to Paris, where he plans to fight for king and country and ends up meeting the story’s namesakes: the three Musketeers.

Because the story involves a large number of swordfights, a professional fight choreographer, Kevin Inouye, worked with the actors.

“Kevin has worked with the King’s musketeers, their opponents, the Cardinal’s guards, and even some of the female characters. Milady, one of the play’s villains, proves equally adept with both sword and knife,” Keats says.