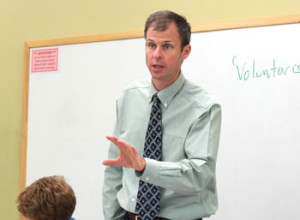 Christendom College philosophy professor Dr. John Cuddeback will appear on EWTN News Nightly on Wednesday, November 27 at 6:00 p.m. in a segment that examines the slow food movement. Cuddeback will also deliver a lecture series at for the Institute of Catholic Culture on November 17 and 24 at 7:30 p.m. The series, entitled “Plato’s Apology: In Defense of Virtue in the Face of Death,” will be held at Saint Michael Catholic Church in Annandale, Va.

Cuddeback earned his B.A. in philosophy from Christendom College, and received a Ph.D. in philosophy from The Catholic University of America in 1997. He is a popular writer and lecturer on various topics including virtue, culture, natural law, contemplation, and friendship. His book “Friendship: Where Virtue Becomes Happiness” was re-published in 2010 by Epic Publishing. A third order lay Dominican, Cuddeback lives with his wife and six children in the Shenandoah Valley.

EWTN can be watched online here.

Admission to the lectures is free and no reservation is required. Saint Michael Catholic Church is located at 7401 Saint Micheal Lane, Annandale, VA 22003. For more information visit InstituteofCatholicCulture.org.