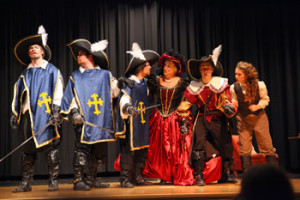 The Christendom College Players performed “The Three Musketeers” on November 22-24. An adaption by Ken Ludwig of Alexander Dumas’ beloved novel, the play featured a talented cast, gorgeous costumes, and swashbuckling excitement that entertained audiences at each performance.

Directed by professional actress, Katie Long, and Christendom literature professor, Dr. Patrick Keats, the play followed the story of D’Artagnan, a young man from the countryside of France. D’Artagnan travels to Paris, where he meets the story’s namesake the three musketeers and assists them in saving France from the evil Cardinal Richelieu.

Highlights from the play included impressive sword fights that were brought to life with the help of a professional fight choreographer, Kevin Inouye.

“Kevin worked with the King’s musketeers, their opponents the Cardinal’s guards, and even some of the female characters. Milady, one of the play’s villains, proved to be equally adept with both sword and knife,” Keats said. 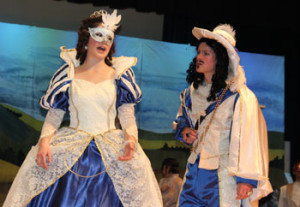 Ornate costumes also brought the stage to life. Made by a team of local designers, the costumes captured the era and the colorful excitement of the story.

“Much thanks goes to Maria McFadden,” Keats said. Maria, 16 years old and the daughter of college admissions director Tom McFadden, worked tirelessly with her team on the creation and assembly of the costumes, which added to the plays success. Each performance was met with a hearty applause, which was well earned by the student actors, set designers, and stage crew.

“Though I have acted before, this was my first Christendom play,” said senior Andrew Hepler, who played Athos, one of the three musketeers. “The experience was very enjoyable, and I cannot think of a better way to reenter the world of acting than with my friends from the college.” 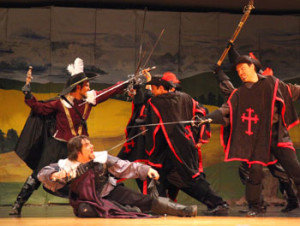 Sophomore Kinsey Benz, who performed in the play and assisted with the costumes, also enjoyed forming friendships over the many hours of rehearsing and producing the play.

“My favorite thing is the awesome friendships you form as you make mistakes and work to perform together,” she said. “The play really helped me not only in flexing my creative skills, but also in building my teamwork skills.”