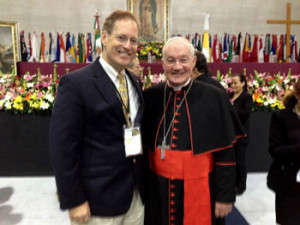 Dr. O’Donnell with the President of the Commission on Latin America, Cardinal Marc Oulette.

In November, Christendom College President Dr. Timothy O’Donnell traveled to Mexico City, Mexico, for a pilgrimage and meeting with the Pontifical Commission on Latin America. The commission discussed the new evangelization in light of Pope Francis’ pontificate as well as other topics including the challenges facing Catholic higher education on the American continent.

O’Donnell participated in the group, led by Archbishop Charles Chaput of Philadelphia, that discussed Catholic higher education in America.

“It was very edifying to work with our brothers and sister in Latin America and to realize that all of us are facing similar challenges in Catholic higher education,” O’Donnell said. “We are all trying to deal with the hostile secularization of so much of contemporary culture.”

O’Donnell said that they examined the ways that the Catholic identity of institutions could be strengthened.

“A re-emphasis on the liberal arts—especially philosophy and theology—is essential to any Catholic education,” O’Donnell said. “We also noted that ‘Ex Corde Ecclesia’ needed to be taken as the definitive and defining document for the strengthening of Catholic identity.”

The group agreed in their final report from a plenary session, that above all else a Catholic college and university must be a place where the student encounters Jesus Christ.

“If that is not taking place, then there is no reason for the college’s or university’s existence,” O’Donnell said.

Representing one of four colleges from North America, O’Donnell was delighted to share the Christendom vision of education, which was received with great enthusiasm by many on the committee.

O’Donnell had the opportunity to visit and work with a number of church leaders including the President of the Commission, Cardinal Marc Oulette of Canada, and Cardinal Sean O’Malley of Boston, who O’Donnell called “a good friend of Christendom College.”

“One of the highlights was video message from Pope Francis in which he expressed his hope that the Americas would become a source for a new evangelization not only on the American continent, but throughout the world,” O’Donnell said.

As a special sign of his esteem for Our Lady of Guadalupe, Pope Francis presented the shrine with a beautiful golden rose which was solemnly presented before the “tilma” or mantel on which the image of Our Lady is imprinted.

From this gathering, the commission will produce a document that will serve as a blueprint for the advancement of the New Evangelization in the Americas, fulfilling Blessed John Paul the Great’s vision in his Apostolic Exhortation “Ecclesia in America.”

For more information about the Pontifical Commission on Latin America, click here.