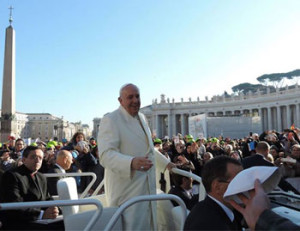 Deucher reaches out to hand the zucchetto to Pope Francis.

On December 4, Christendom College junior Peter Deucher traded zucchettos with Pope Francis at an audience held just before the end of the college’s Junior Semester in Rome Program.

“We got to St. Peter’s square extra early to secure seats next to the barrier,” Deucher said. “We arrived at five, but it wasn’t till ten that the Pope wheeled up.”

As Pope Francis passed by, Deucher reached out holding a zucchetto—the white skullcap worn by the Pope.

“My fellow students did a great job of protecting our vantage point from the excited crowd,” he said. “The Papal guard escorting the vehicle completely ignored the white zucchetto I was holding out for them to hand to the Pope. But thankfully, Pope Francis saw me and stopped the car.”

Deucher says that the expression on the pope’s face when he first looked at him and then again when he handed the hat back to his guard was “priceless.”

“He has one of the most understanding smiles I have ever seen,” Deucher said.

After seeing Pope Francis in person earlier in the semester, Deucher felt compelled to switch hats with him. Every time he saw him during his semester in Rome, he was struck by the Pope’s sincerity, simplicity and humility.

“I realized, while in Rome, that Pope Francis had picked his name well,” Deucher said. “I love St. Francis, and so I love Pope Francis as well.”

Deucher plans to take the zucchetto back home to North Carolina where he will place it in the Oratory of Sts. Bruno and Rose, a private chapel built by his pastor.

For more information about Christendom College’s Junior Semester in Rome program, which features living quarters with views of the Vatican walls, visit christendom.edu/rome.