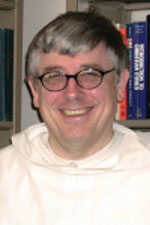 Moral theologian Rev. John D. Corbett, O. P., will deliver the annual St. Thomas Aquinas Lecture on Monday, January 27, at 4 p.m. The talk, entitled “The Angelic Doctor and the Lord of the Angels,” will be held in the St. Kilian’s Café, and is open to the public.

Fr. Corbett grew up in Columbus, Ohio, and came to know the Dominicans through family members in the Order, through St. Patrick’s Parish, and through attending Providence College, from which he graduated in 1973 with a B.A. in Political Science. Fr. Corbett joined the Dominicans in the summer of 1974 and was ordained a priest in 1980. He completed his Licentiate in Sacred Theology in 1981 and began to teach moral theology as well as the Development of Western Civilization at Providence College. Three years later he began his doctoral studies at the University of Fribourg in Switzerland and was awarded his Ph.D. after completing his dissertation on the theology of virtue in the thought of Thomas Aquinas. Fr. Corbett was appointed to the Faculty of the Pontifical College Josephinum in Columbus, Ohio, in 1991, and spent the next seven years teaching various courses in moral theology, as well as offering retreats, spiritual direction, and personal formation for seminarians. In 1998 he joined the Pontifical Faculty of the Immaculate Conception, where he teaches in the area of fundamental moral theology and the theology of the virtues, covering material from the Prima Secundae and the Secunda Secundae in four sequential courses. He also offers seminars in Thomistic Action Theory, Contemporary Interpretations of Natural Law, as well as a seminar in the thought of Charles Taylor and Alasdair MacIntyre. He is interested in developing courses on the Ethics of Homicide, as well as on the Development of Casuistry in the Catholic Church.

Christendom College hosts a distinguished speaker each year on or around the feast of St. Thomas Aquinas (January 28) to speak on a philosophical or theological topic.