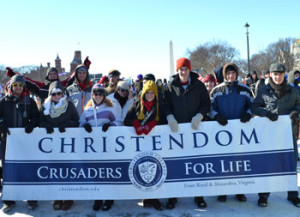 On January 22, approximately 100 Christendom College students attended the 41st March for Life. The charter bus company, which was scheduled to transport the entire student body to the March, cancelled the trip to Washington, D.C., due to heavy snow and hazardous road conditions. The college had cancelled classes for the day, so those who were unable to attend the March participated in an all-day prayer vigil in Christ the King Chapel.

“I was so proud of my fellow students,” senior Madeleine Murphy said. “Despite the lack of official transportation and leadership, many of us found a way to get there.”

Students traveled in the vehicles of fellow students and faculty. A group of students even took the Christendom banner with them.

“It was great having the banner there for all of us to rally around,” freshman Rosie McNeely said. “It was so cold, but some of us even got up on each other shoulders to lift the banner high—so that we could all be united and march together.”

On campus, the college’s head chaplain, Fr. Donald Planty, organized an all-day prayer vigil for the unborn in the Chapel. After Mass, students participated in the recitation of the mysteries of the Rosary and Eucharistic adoration.

“The campus seemed to have an atmosphere of hopeful prayer all day,” sophomore Kinsey Benz said. “Although we could not attend the March, Christendom was united in prayer to support its goal.”

The college’s commitment to the pro-life cause is robust, having attended the March for Life as a community every year since the school was founded 36 years ago. In 1984, 1998, 2009, and 2012, Christendom students led the March for Life—carrying the lead banner and flags—making it the only college to be selected four times to lead the event. Christendom students are active in pro-life work year round through a number of student clubs: Shield of Roses, Students for Life, and Outreach.

Shield of Roses is a group that prayerfully protests at Planned Parenthood in Washington, D.C., every Saturday, as well as offers sidewalk counseling to women considering having an abortion. The Students for Life club focuses on political activism with regards to the sanctity of human life issues. The Outreach club is active in all the corporal works of mercy, including volunteering at the local pregnancy center.