Rev. Corbett Reveals How the Angels Got it Wrong 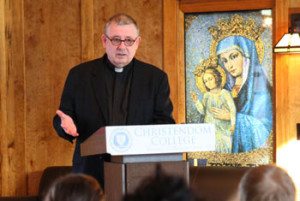 “How does an angel get it wrong,” Rev. John D. Corbett asked during his lecture to students and faculty on January 27 at Christendom College. Rev. Corbett’s talk, entitled “The Angelic Doctor and the Lord of the Angels,” was the annual St. Thomas Aquinas Lecture, which discussed the nature of angels and how such high beings could have fallen from God’s grace.

A moral theologian currently teaching at the Pontifical Faculty of the Immaculate Conception, Rev. Corbett explained that the fall of the angels is “a bit of a theological conundrum.

“[Angels] can’t get drunk, can’t get tired, can’t get irritated. There’s no such thing as a traffic jam in heaven—they’re not like New York cab drivers,” he quipped. “So there is no passion that can lead them astray. Nor habit. They don’t have a bad disposition, because God made them good. They also can’t really make mistakes through errors because their knowledge is perfect.”

Rev. Corbett said that the classic answer is that the bad angels “got it wrong” by pride, by putting themselves before God and making themselves their last end. He agreed that this was true, but that it only gave what he called a “formal account” of what happened regarding the fall of the good angels and not a “material account.”

“The angels where too bright to make the mistakes that we commonly attribute to them,” Rev. Corbett said. “For example, some people think the devil fell because he wanted to be God. Nonsense. The devil was far too intelligent to think that he could be God. He knew that he was a created spirit and thus the psychological impossibility for him to try to be God. That isn’t it.”

A minority tradition holds that the some of the angels, upon seeing God’s plan to become incarnate in a human being, became enraged, he said. 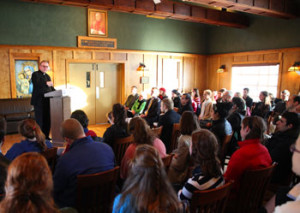 “What! This imperfect slow, plodding, eating, sleeping, burping animal is going to be elevated and their nature is going to be assumed by the person of the Word. It is unworthy of God to sully Himself with this lowly creature. This creature—this nothing! This pile of garbage is going to be the site of the personal union of the Word of God with humanity—with human nature? No, they say, we won’t tolerate that.”

Rev. Corbett said that incarnation is not necessary and that it could have been otherwise. God could have mediated His grace through Lucifer. If He had wanted, He could have used Lucifer as the instrument to communicate grace to all the rest of creation.

“But it didn’t happen,” he said. “God chose to become incarnate and that roused the pride of the angels to rebel… The incarnation represents a great mystery, which we could call the humility of God, the tremendous love of God that would embrace our fallen nature. Christ obeys the Father’s will and accepts death… That is what was accepted and loved by the good angels.”

“It’s because he was humble enough to accept the actual concrete decision of God to save us through the flesh of a man born of a virgin,” he said. “This is what shattered the devil’s pride and this mystery of Divine humility is what causes all of the angels to sing in delightfully self-forgetful ways and St. Thomas is singing there with them without a thought for himself and with his mind still aglow at the concrete mystery of the way God decided to save us.”

This insightful lecture can be downloaded at Christendom on iTunes U, christendom.edu/itunesu.

Christendom College hosts a distinguished speaker each year on or around the feast of St. Thomas Aquinas (January 28) to speak on a philosophical or theological topic.