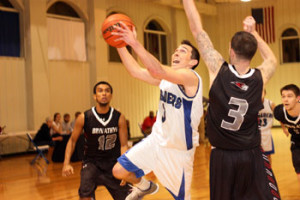 On January 24, the Crusader basketball team won the first in a series of three wins in a game against local rival Lord Fairfax Community College. The men went on to defeat Appalachian Bible College and Patrick Henry College on January 25 and 29 respectively.

Both the men and women’s teams headed to Elizabeth City, N.C., on January 31 to play a doubleheader at Mid-Atlantic Christian. The Lady Crusaders earned a victory behind a solid team performance. The men’s team was out-matched and fell to the very talented Mustangs.

On February 1, both teams made Christendom proud as they fought a tough NCAA Division III opponent, Bryn Athyn College, but both teams fell short on the scoreboard.

Find out more about Crusader athletics at christendom.edu/athletics.