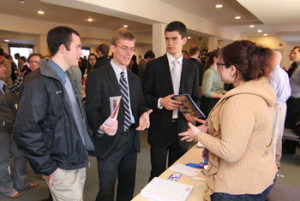 DUE TO INCLEMENT WEATHER THIS EVENT HAS BEEN CANCELLED.

On Thursday, February 13, Christendom College will host its annual Career Fair on its Front Royal, Va., campus from 1 to 4 p.m. Over twenty businesses and graduate schools will be present hoping to recruit a Christendom-educated employee or student.

“Last year’s inaugural fair drew nineteen exhibitors and over 220 students, and I expect an even greater turnout this year,” says Mike Mochel, Christendom’s Director of Career Development. “It’s going to be a great event connecting the participants with their future.”

The fair is open to Christendom’s current students and alumni, as well as students at other colleges and universities in the area.

“The Christendom student is an easy sell to any company,” Mochel says. “They are well-versed in the virtues of integrity, loyalty, industriousness, honesty, conscientiousness, and other traits that every employer values. They are skilled in applying logic and critical thinking skills to the problem-solving process. And they are experts in the art of communication, having written hundreds of pages over their Christendom career and actively defended their positions in a variety of ways, including an oral defense of their senior thesis.”

For more information about the Career Fair, contact Mike Mochel at mmochel@christendom.edu.