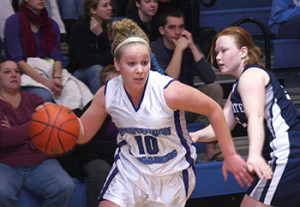 Led by junior Mary Barbale, the Lady Crusaders of Christendom College enjoyed a victorious end to a winning basketball season as they dismantled the Knights of Central Penn College on February 17. Barbale scored a career-high of 40 points in the game, which included eight three-pointers, contributing to the 76-58 victory.

“Mary played tremendously well,” Coach Mike Brown said. “The entire team did a great job defensively, as we have done all year. Bridget McMahon guarded their best player real well and we were able to move the ball on offense and knock down open shots.”

Barbale’s amazing effort places her in the record books as the first female basketball player in Christendom history to score 40 points in a game.

“It was a great way to end our season,” Barbale said. “With two hard wins—first against Trinity and then last night at Central Penn. The season was a blast. It was such a great group of girls who fought and improved with each game.”

Find out more about athletics at Christendom at christendom.edu/athletics.