Christendom Student Experiences the Universality of the Church in Rome 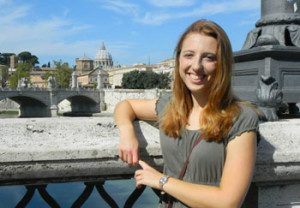 “None of us will ever forget it as long as we live,” Maria Bonvissuto, of Nashville, Tenn., said of her first encounter with Pope Francis at a general audience during Christendom College’s Junior Semester in Rome Program.

Bonvissuto discovered that living in the Eternal City—with such close proximity to the Vatican—not only gave her an intimate view of the earthly center of the Catholic faith, but also deepened her understanding of the church’s universality.

Christendom’s Semester in Rome Program, now in its 11th year, is the capstone experience to the liberal arts education that students receive in their first two years at the college. The college’s unique 86 credit-hour core curriculum, with an emphasis on the patrimony of Western civilization, immerses its students in history, theology, philosophy, literature and much more. When the students then spend a semester in Rome, in the heart of the church, all of these subject areas are brought to life.

“Hearing the pope’s address read at that audience in so many different languages really impressed on us the universality of the Catholic Church,” Bonvissuto said.

She and her classmates resided next to the Vatican and walked through St. Peter’s Square every morning on their way to class. So, while seeing the pope became a regular phenomenon for them, their first audience with Pope Francis was sheer “excitement and joy.”

“I can’t really describe it,” Bonvissuto said. “When Pope Francis emerged in the Popemobile and began driving through the crowd, we weren’t sure if he would drive down our row, so the sense of anticipation was doubled for us every time the vehicle turned and got closer.”

Eventually the pope’s vehicle turned toward them.

“It was so surreal to have Pope Francis slowly advance toward the spot where we were standing. None of us could believe it was actually happening. Then he drove right by and looked right at our group. He was so close I could almost have reached out and touched him,” she said. “How do you describe being right there, and seeing the Holy Father, the vicar of Christ Himself, pass right by you? I think it’s an experience you really have to have for yourself to fully appreciate it.” 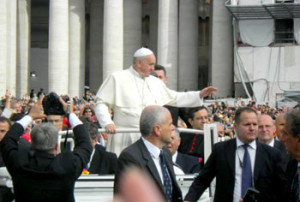 Bonvissuto recalled how during the audience, members of the entire congregation, who hailed from a myriad of countries and spoke many languages, all prayed the Our Father in Latin.

“It was so powerful,” she said.

During her two-and-a-half months in Rome, she came to see the city as “a never-ending wonder” and found the educational, spiritual and cultural experience of the program to be “life-changing.”

“We all had moments that touched us, whether it was walking the streets of Assisi, seeing Papa Francesco up close, praying before the tomb of a favorite saint, marveling at the view from the Duomo in Florence, gazing at the ceiling of the Sistine Chapel, or simply spending time with friends over delicious food and wine at our weekly Wednesday night dinners,” she said. “We had literally walked in the footsteps of saints.”

And it was not only her faith that was enriched but also her cultural horizons. Bonvissuto and her fellow juniors in Rome took courses in art and architecture, theology, Italian, and Roman history.

“Living in the very place where so much of the art, history and religion of the West has its foundations was amazing,” she said.

Classes often were held at historical and artistic sites across the city, which gave the students a firsthand experience of the architecture and art of the city. The program included trips within Italy, but there were also free weekends built into the program’s schedule. Many students took advantage of these weekends to travel beyond Italy and discover the cultures of France, Poland, Ireland, the Czech Republic, Israel and more.

“The program gave us a chance to see the world, a chance that we may never have again in our lifetimes,” she said.

The Rome curriculum includes the theology junior-year core course and three courses designed specifically to take advantage of Rome’s historical and cultural riches. In addition, the program includes a visit to Florence, home of Michelangelo’s David, Brunelleschi’s dome of the cathedral of Santa Maria del Fiore, and countless other artistic and architectural treasures, with side trips to Assisi and Siena.

This story appeared in the ]Arlington Catholic Herald on 2/19/2014.