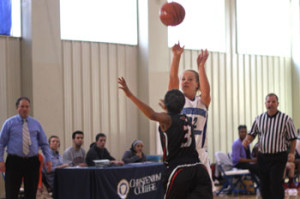 Today, the USCAA announced that this week’s Women’s Division II Basketball Player of the Week honor goes to Mary Barbale, a junior at Christendom College.  Barbale became the first female player in Christendom College history to score 40 points in a single game.  During the February 17 victory over Central Penn College, Barbale shot 65% from the floor, which also included shooting 73% from behind the arc. Adding to her stat line, she grabbed 12 rebounds to finish the game with a double-double.

“It’s an honor to receive this recognition,” Barbale said. “I would like to thank Coach Brown and my teammates for making it a great season.”

This is the second time Barbale has been awarded player of the week in the national conference.

“Mary’s achievement is definitely a highlight in her career here and of this year’s team,” Christendom College Athletic Director Chris Vander Woude said. “The women on the team really enjoyed being with each other on and off the court. They didn’t care who got the points, but did whatever was needed for the team. On this night, Mary was in a zone that players reach at different points in their careers and kudos to her teammates for playing unselfish and getting her the ball when she was open. More importantly, it was the final win of the women’s season and definitely a victory that the team will remember for quite some time.”

Find out more about Christendom athletics at christendom.edu/athletics. For more information about the USCAA visit theuscaa.com.