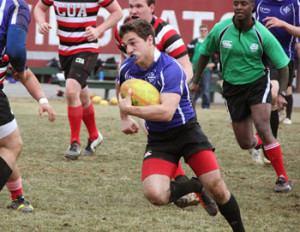 The Crusader rugby team played their first home match of the season this past Saturday, March 1. The Crusaders tied Catholic University of America with a score of 19-19.

“It was a great game to play in,” said Christendom senior and rugby player Conor O’Donnell. “I was proud of how we competed against a much larger and physical team. It was frustrating to end in a tie, but, with all the young talent we have, I am sure the Crusaders will get the win next year.”

The Crusaders next home match will be on March 22 against George Mason University, and the first ever Shield Match will be against Franciscan University of Steubenville on April 12 in Front Royal, Va.