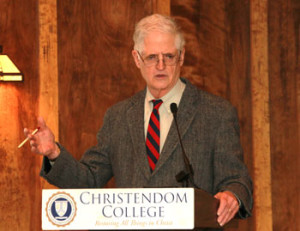 Dr. Emmet Kennedy, Professor Emeritus of European History and International Affairs at George Washington University, will deliver two lectures to the students and faculty of Christendom College at 4 p.m. in St. Kilian’s Café on April 9 and 30. The first lecture is entitled “Tocqueville, China, and the West” and the second is entitled “Europe, Christianity, and Globalism.”

Kennedy received his B.A. from Johns Hopkins University and his Ph.D. from Brandeis in French history. Before coming to George Washington University in 1973, he taught at Kent State University and at the University of Toulouse in France. He is a former fellow of the American Council of Learned Societies and the Woodrow Wilson International Center for Scholars. He currently offers courses on the history of France, the French Revolution, and European intellectual history.

His other books include, A Philosophe in the Age of Revolution: Destutt de Tracy and the Origins of “Ideology” (American Philosophical Society, 1978) Theatre, Opera and Audiences in Revolutionary Paris (Greenwood, 1996) and Secularism and its Critics in European Thought (2006).