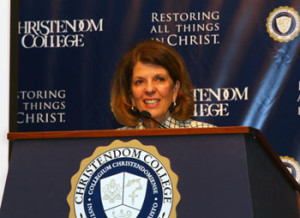 Dr. Marilyn Coors, a professor of bioethics and genetics at the University of Colorado, delivered a talk entitled “A Catholic Approach to Topics in Bioethics Across the Life Span” to the students and faculty of Christendom College on April 7. Coors’ talk examined the current hot-button bioethical issues, including in vitro fertilization (IVF), organ transplantation, genetic engineering, neuroscience, and mechanical life support.

“Without accurate facts, a bioethical analysis is incomplete, naïve, or just simply wrong,” Coors said. “When you have accurate scientific facts, I have found, it is going to back up our Catholic beliefs and, when it doesn’t, it is because the science is wrong. Truth always wins out.”

Coors noted that for some areas of bioethics, the Magisterium of the Church has offered clear definitive teaching. While for other areas, the Catholic tradition offers principles and values that help to shape a Catholic response and there you can find a plurality of opinions or judgments among thoughtful and faithful Catholics.

In addressing the topic of fertility treatments and IVF, Coors referred to the 1987 Vatican document, “Donum Vitae,” which stated, “if the technical means facilitates the conjugal act or helps it reach its natural objective, it can be morally acceptable. If … the procedure were to replace the conjugal act, it is morally illicit.”

“The document provides a rule of thumb,” she said. “Its moral evaluations are as valid today as when the document was first issued. Assisted technologies will adapt and change as science advances and changes, but the morality expressed in this document will remain the same.”

She said that this “rule of thumb” can help assist people in discerning the morality in what she called “a plethora of assisted reproductive technologies” with “more to come in the future.”

Coors also debunked the myth of successful embryonic stem cell research, which results in the destruction of human embryos.

Concluding, Coors noted that in bioethical questions of morality one cannot expect the same level of certitude found in mathematics.

“We can not expect to have complete assurance that our choices will always be the best. Nor does the Church require this of us,” she said. “We can’t insist on perfect moral certitude in healthcare or we would be unable to act in many medical situations. Rather our obligation is to form our conscience in the light of available facts and the Church’s moral teachings.”

This lecture was part of the college’s Major Speaker’s Program, an important aspect of the academic life at the College that offers the students and community an opportunity for cultural, intellectual, and spiritual enrichment beyond the classroom. Through the program, students are able to gain greater insights and depth of understanding of important issues, and to interact personally with a wide range of men and women who are shapers and critics of our society.