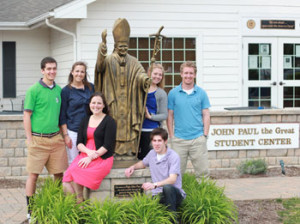 The students of Christendom College will celebrate the canonizations of Popes John Paul II and John XXIII with a series of events being held from April 22-28. Scheduled events include films, lectures, Masses, and a live simulcast of the canonizations from Rome on April 27. Students participating in the college’s Junior Semester in Rome Program will join the hundreds of thousands of pilgrims that are anticipated in St. Peter’s square for the event.

“A unique charism of Christendom is our devotion, not only to the Holy See, but also to the person of Holy Father,” college president Dr. Timothy O’Donnell says. “In a special way we are honoring the memory of Pope John XXIII, since the college itself is a fruit of the teaching of the Second Vatican Council, which he called. Pope John Paul the Great happened to be the pope for almost the entire history of our college and he always showed special solicitude for the work of the college.”

Blessed Pope John Paul II knew Christendom College well, having met with O’Donnell on numerous occasions. In a 1992 meeting, the late-pontiff said to O’Donnell and the college’s founder, Dr. Warren Carroll, that Christendom was “doing a great work for the Church.” 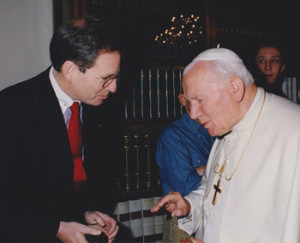 O’Donnell noted that the college community has had a great devotion to Blessed John Paul II. One of the central hubs for students on campus is the John Paul the Great Student Center, which features a beautiful and welcoming statue of the pope that students walk by everyday. Also, the college’s Christ the King Chapel is home to a chalice and paten of John Paul II, which was given to the College on the occasion of the chapel’s dedication.

The celebratory events, organized by college chaplain Fr. Donald Planty, begin on Tuesday, April 22 at 7:30 p.m. in St. Kilian’s Café with a talk by Fr. Planty on “Personal Encounters & Inside Stories about Pope John Paul II.” On Wednesday, April 23, Christendom history professor Dr. Chris Shannon will deliver a lecture entitled “The Significance of Pope John XXIII in Church History” at 7:30 p.m. in St. Kilian’s Café. A series of movie nights will then follow on April 24 and 25 at 7:30 p.m. in the café showing “Pope John Paul II,” starring Jon Voight, and “John XXIII: The Pope of Peace,” starring Ed Asner. On Saturday, April 26, Fr. Planty will lead students on a pilgrimage to the Bl. John Paul II Shrine in Washington, D.C. At 4:00 a.m. on Sunday, April 27 students in Front Royal will join the students in Rome through a simulcast of the canonizations, which will be followed by Divine Mercy Sunday Mass at 3:00 p.m. in Christ the King Chapel. The following day, the 7:30 and 11:30 a.m. Masses will be in honor of Sts. John XXIII & John Paul II, respectively.

“With the entire universal church, we rejoice at the elevation of these two outstanding popes to sanctity,” O’Donnell said.