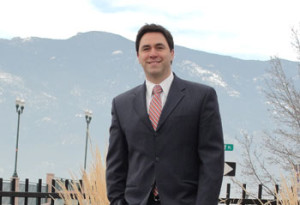 Christendom College alumnus Mark Rohlena (’00), president and chief executive officer of Catholic Charities of Central Colorado, has been named director of the Office of Domestic Social Development of the U.S. Conference of Catholic Bishops (USCCB).

“Mark Rohlena has a proven track record as a leader and manager in putting the Church’s social teaching into action,” said Msgr. Ronny Jenkins, USCCB General Secretary. “Mark has a heart for the poor and vulnerable and a critical understanding of the way public policy impacts the Church’s ground-level, charitable work. He is well-formed in the faith, and especially Catholic Social Teaching, which has inspired his strong commitment to service, leaving a successful career at a large law firm to advocate for those most in need.”

Rohlena double-majored in history and political science and economics at Christendom before earning his law degree from Ave Maria School of Law.

As head of the Colorado Springs agency, Rohlena has overseen the organization’s annual budget of $3 million and 50 employees, who serve in 10 counties of Colorado with the help of over 1,600 volunteers per month. Services include poverty reduction programs, parish social ministry, family immigration services, adoption services and disaster relief work. The organization played an important leadership role in assisting those affected by the recent fires in Colorado.

Before his work as president of Central Colorado Catholic Charities, Rohlena was the Senior Ethics and Conflicts Attorney for Holland and Hart, LLP of Denver. His work at the firm included legal ethics, employee benefits law, labor and employment law, and state and local tax law.

Rohlena says that he is thankful for the skills he gained at Christendom and sees his alma mater as an essential first step to the success he has found as a lawyer, CEO of Catholic Charities, and in his future work with the USCCB.

Rohlena stressed the opportunities to serve the poor in his new position.

“The Church has been, and must continue to be, among the strongest voices in the public square on behalf of the poor, the sick, the weak and the suffering,” he said. “It is a wonderful opportunity to be part of that legacy, to join the work of urging federal policymakers to recognize that each and every one of our neighbors is filled with dignity – worthy to be encountered, loved and cared-for. It is a unique way to witness to the love of Christ, which, as Pope Francis reminds us, lies at the heart of our charitable work.”

Rohlena will oversee USCCB efforts in the area of domestic social development, with a special emphasis on poverty. He will assume his position at the bishops’ conference in August.