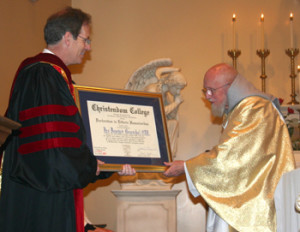 The entire Christendom College community is joining Catholics across the nation in mourning the loss of Fr. Benedict Groeschel. The great author, speaker, and co-founder of the Franciscan Friars of the Renewal died on October 3, the eve of the feast of St. Francis of Assisi.

Fr. Benedict was a great supporter of Christendom College, having attended the college’s 2005 Commencement exercises, where he received and honorary doctorate, as well as speaking at the college’s summer conference series.

He also gave a hearty endorsements of the school, including a 2007 video address.

“In the chaotic period of the 1960’s and 70’s, characterized by so much confusion, his was always a voice of sanity and balance,” college president Dr. Timothy O’Donnell said of Fr. Benedict. “With his deep love for Christ and His Church, through his books, talks, and television appearances, he led many to embrace the faith. As spiritual father of the Franciscan Friars of the Renewal he has touched countless numbers of souls.”

O’Donnell called Fr. Benedict a “good personal friend’ and said that he and his wife, Cathy, will miss him terribly.

“We will continue to remember him and his wonderful community in our prayers,” he said.