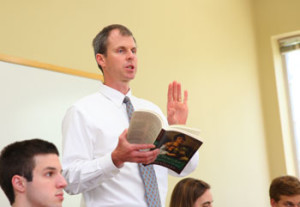 Christendom philosophy professor Dr. John Cuddeback is releasing a new lecture series with Catholic Courses entitled, “Aristotle’s Ethics: A Guide to the Good Life.” The series will be available to the public on October 15.

Using Aristotle’s Ethics and the writings of St. Thomas Aquinas, Dr. Cuddeback takes the listener through a thorough examination of the good life. He explores the fundamentals of goodness through a study of ethics that includes the objectivity of good and evil, the pursuit of human happiness, the moral, intellectual, and cardinal virtues and how habits and vices shape the human character.

The course contains eight thirty-minute lectures and is available in either DVD or Audio CD format. The course can be ordered at the Catholic Courses website.

Dr. Cuddeback earned his B.A. in Philosophy from Christendom College, and received a Ph.D. in Philosophy from The Catholic University of America in 1997. He is a popular writer and lecturer on various topics including virtue, culture, natural law, contemplation, and friendship. His book “Friendship: Where Virtue Becomes Happiness” was re-published in 2010 by Epic Publishing. His writings have been in numerous publications including The Thomist, Nova et Vetera, and The Review of Metaphysics.