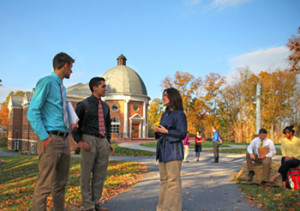 In the 2015 edition of “The Newman Guide to Choosing a Catholic College,” Christendom is described as “a standard for fidelity and traditional education against which other Catholic liberal arts colleges are measured.” Published earlier this month by the Cardinal Newman Society, the guide praises the college for its high caliber academics, robust spiritual life, and vibrant campus culture.

The Newman Guide says of Christendom:

“For more than 35 years, Christendom College has made a vital contribution to American Catholic life through its solid spiritual formation and its liberal arts curriculum. What was once a tiny holdout against the decline of higher education is today a model for Catholic liberal arts colleges, with a well-deserved reputation even in Rome… On the key measures of Catholic identity and liberal arts education, few American colleges can compare.”

“It is always wonderful to see Christendom recognized for its fidelity to the Faith and rigorous academics,” Director of Admissions Sam Phillips says. “Our academic program is preserving the liberal arts in our nation. We are offering the great educational tradition of the Church, which every great leader in the history of western civilization would have received.”

Phillips also notes that the guide affirms what Pope St John Paul the Great said about the college,
“You are doing a great work for the Church.”

To see the complete listing and find our more about The Newman Guide visit www.cardinalnewmansociety.org.