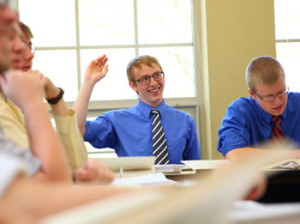 Christendom College is pleased to announce the addition of a major in mathematics with an option to minor in physics for the fall semester of 2015. This spring, sophomores will be able to declare themselves mathematics majors for the first time since 1992. Though the option to major in math was suspended for a time, the college is excited to be reintroducing it as an expansion upon the current math minor.

The college has never been void of opportunities to study higher levels of mathematics, consistently offering a variety of specialized math courses as part of their preexisting minor. This addition of the major is testament to Christendom’s effort to preserve the liberal arts tradition in America. Dr. Greg Townsend, Vice President for Academic Affairs and one of the school’s primary math and science professors, is excited about the new major.

“Mathematics is an important liberal art because it trains students to think deductively, an ability they need to be successful in the higher sciences like philosophy and theology,” Townsend said. “Not only does it help train the mind to better understand the speculative sciences, but the speculative sciences form the mathematician’s mind in a way which allows him to understand the philosophical ideas of mathematics better.”

Townsend explained that there is a great value in earning a math degree from Christendom College.

“Our math degree would be unique compared to those from other schools,” he said, “for our graduates would understand the relationship of the subject to the rest of human knowledge. Although our requirements for the major would be similar to those from other colleges across the country, our students would still be immersed in our unique 86 credit hour core curriculum – learning how to read, write, and think critically.”

“This major is a great asset to the college’s many advantages, and not only remains true to the original hopes for the school, but also has a wide appeal to new families considering it,” college president Dr. Timothy O’Donnell said. “The major will further strengthen our excellent educational program—fulfilling the founders’ vision—and will have broad-based appeal to many of our constituents since mathematics is a key part of our modern world.”