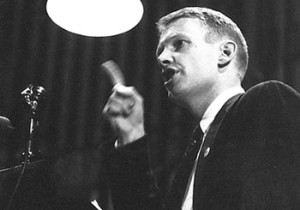 Christendom College is proud to announce a tribute to the life and legacy of L. Brent Bozell Jr. on Tuesday, November 18 at 4:00 pm in the Chapel Crypt at Christendom College. The tribute will feature a panel discussion of Bozell’s life and legacy featuring E. Michael Lawrence, who worked with Bozell during his years at Triumph, and Daniel McCarthy, editor of The American Conservative.

Bozell was one of the founders of the postwar American conservative movement and remains one of the most important American Catholic intellectuals of the twentieth century. He was also close friend of Christendom’s founder, Dr. Warren Carroll. The two worked together on the Catholic journal of opinion Triumph. The journal was dedicated to the task of articulating a vision of Christian society for the modern age, and Dr. Carroll founded Christendom College in order to continue the mission of Triumph through higher education.

According to Warren Carroll, “Christendom College was gestated in the womb of Triumph magazine and the Society for the Christian Commonwealth, Brent Bozell’s creations. All of our original five faculty were long-time subscribers to Triumph and three had attended the program in Spain…Many of the original members of our Board of Directors were Triumph readers. In a very fundamental sense Christendom College was a Triumph enterprise, and always will be. As long as any of this present generation of College leaders and supporters shall live, I am confident they will always acknowledge our debt to Brent Bozell.”

ISI books has recently published a full-length biography of Bozell entitled Living on Fire: The Life of L. Brent Bozell, Jr., by Daniel Kelly. An anonymous donor has generously agreed to provide every student at Christendom with a copy of the book.

This event is free and open to the public.