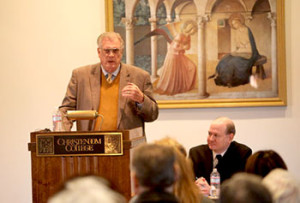 On November 18, Christendom held a tribute to the late L. Brent Bozell, Jr., hosted by the college’s history department. The event marked the release of a new full-length biography on Bozell’s life by Daniel Kelly entitled Living on Fire: The Life of L. Brent Bozell, Jr.

Students, faculty and guests filled the lower hall of Christ the King Chapel to hear a panel discussion about Bozell’s life and legacy. Guest speakers E. Michael Lawrence, who worked with Bozell during his years at Triumph, and Daniel McCarthy, editor of The American Conservative, kept the audience entertained and fascinated with their reflections on this great Catholic intellectual.

Bozell was one of the founders of the postwar American conservative movement and remains one of the most important American Catholic intellectuals of the twentieth century. He was also close friend of Christendom’s founder, Dr. Warren Carroll. The two worked together on the Catholic journal of opinion Triumph from 1965 to 1975. The journal was dedicated to the task of articulating a vision of Christian society for the modern age, and Dr. Carroll founded Christendom College in order to continue the mission of Triumph through higher education.

“In a very fundamental sense Christendom College was a Triumph enterprise, it always will be,” Lawrence said, quoting the words of Carroll. “As long as any of this present generation of college leaders and supporters shall live, I am confident they will always acknowledge our debt to Brent Bozell.”

Examining Bozell’s life, Lawrence spoke of Bozell’s childhood and conversion to the Catholic Faith, his time at Yale, his work at National Review, his political career, and of course of his days founding Triumph. Lawrence recalled many memories from his friendship with Bozell and the time they spent working together on Triumph.

Dan McCarthy followed by giving a talk on the importance of Bozell’s thought to American conservatives and Catholics in particular. He examined the intellectual repercussions of two of Bozell’s most famous essays, “Freedom or Virtue?” and “The Death of the Constitution,” and spoke about the most important aspects of Bozell’s thought. 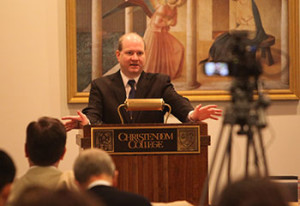 “So in all of this Bozell was tremendously bold, and the question may arise, if Bozell came to be so critical and so insightful in recognizing the failures of movement conservatism as it was expressed in the 1960’s, where is the Bozell perspective today,” McCarthy asked. “Is there any legacy, is there any follow-on to this critique and this pointing towards a higher metaphysical goal for our discussions? Well, I think there is, and there are in fact several permutations in conservatism and in thought on the American right, which owe a tremendous debt to Brent Bozell—a tremendous debt even to the radical Bozell of Triumph and of ‘The Death of the Constitution.’”

McCarthy mentioned social conservatism, libertarianism, and the Supreme Court’s role in government as areas where Bozell’s thought was especially influential in the conservative movement.

Bozell’s son, L. Brent Bozell III was in attendance and also made some remarks on his father’s life. He spoke of joy as being a distinct characteristic of Bozell’s work.

The audio and video of this event is available at Christendom on iTunes U.