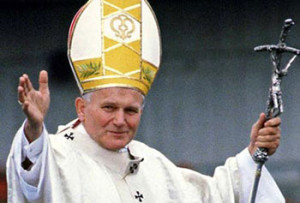 On January 7, Christendom College will host a first-class relic of the recently canonized Pope St. John Paul in the Chapel of Christ the King. Beginning at the 11:30 a.m. Mass, veneration of the relic will continue until 2:00 p.m. Presented by the Servants of the Pierced Hearts of Jesus and Mary, the relic is a vial of the late pontiff’s blood—one of only three such relics in the world.

“Christendom College has had a strong connection to Pope Saint John Paul since his pontificate, and so it is nothing less than an absolute honor to have the opportunity to venerate a first-class relic of such a beloved saint,” said Fr. Stephen McGraw, the chaplain of the college.

Catholics across the world venerate relics—that is, show them great respect and honor—and there are different levels of importance given to a relic, distinguished by how closely they are connected to a saint. In the case of the relic of Pope St. John Paul, it is a “first-class” relic since it was taken directly from the saint during his final hospitalization prior to his death in April of 2005.

The Servants of the Pierced Hearts of Jesus and Mary, a religious institute founded in the Archdiocese of Miami, Florida, in 1990, are responsible for organizing the relic’s pilgrimage in the United States.

Pope St. John Paul knew Christendom College well, having met with College President Dr. Timothy O’Donnell on numerous occasions, and appointing O’Donnell a member of the Pontifical Council for the Family in 2002. In a 1992 meeting, the late-pontiff told a group of Christendom College pilgrims that Christendom was “doing a great work for the Church.”

The college community has always had a great devotion to Pope John Paul. One of the central hubs for students on campus is the John Paul the Great Student Center, which features a beautiful and welcoming statue of the pope that students walk by everyday. Also, the college’s Christ the King Chapel is home to a chalice and paten of the saint, which was given to the College on the occasion of the chapel’s dedication. The same chalice will be utilized during the Mass on January 7.

The Mass and veneration of the relic are open to the public.