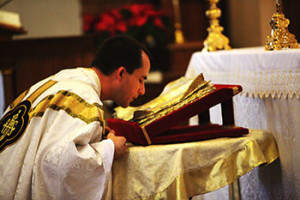 Christendom College hosted a relic of Pope St. John Paul on January 7 as it travels on pilgrimage across the U.S., continuing the relationship between Christendom and the recently canonized saint. The relic, a vial of the late pontiff’s blood, is the only traveling relic of its kind, brought to Christendom by the Servants of the Pierced Hearts of Jesus and Mary.

“Pope St. John Paul spoke of Christendom as ‘doing great work for the Church’ during his life,” Fr. Stephen McGraw, Christendom’s chaplain, said at Mass in the college’s Christ the King Chapel. “He constantly emphasized to ‘be not afraid’, and so recognizing this message, especially in today’s world, is crucially important. We are honored to have Pope Saint John Paul here again today.”

Following Mass, hundreds of people lined up to kiss the relic of the late Holy Father, and to ask for his intercession on their behalf.

The canonized pontiff knew Christendom College well, having met with College President Dr. Timothy O’Donnell on numerous occasions, including appointing O’Donnell a member of the Pontifical Council for the Family in 2002. The college’s Christ the King Chapel is also home to a chalice and paten of the saint, which were both used during Mass in honor of the late pontiff.

Catholics across the world venerate relics—that is, show them great respect and honor. In the case of the relic of Pope St. John Paul, it is a “first-class” relic since it was taken directly from the saint prior to his death in April of 2005.

Christendom College’s community has always had a devotion to Pope St. John Paul, shown particularly with the construction of the John Paul the Great Student Center on campus in 2005. One of the college’s central hubs, it features a beautiful and welcoming statue of the pope that visitors walk by everyday.

The Servants of the Pierced Hearts of Jesus and Mary, a religious institute founded in the Archdiocese of Miami, Florida, in 1990, are responsible for organizing the relic’s pilgrimage in the United States.