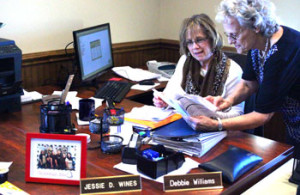 This week, Christendom’s business office opened in its new location across the street from the main campus, bringing much needed space to the department, and freeing up office space in Regina Coeli Hall as well. Located in a renovated home named St. Kevin’s, and within eyesight of Christendom’s recently developed athletic fields, the business office is now in a central location for all students and visitors as the campus continues to expand to the east.

The business office includes the purchasing and accounts payable departments, the human resources and controller offices, and the student billing and financial aid offices—now all in one central location.

“When Christendom first moved to its current campus here in Front Royal in 1979, we utilized only a small portion of our 100-acres. Now, our campus has grown to close to 120-acres, with land on both sides of Shenandoah Shores Road,” said Vice President of Enrollment and Marketing Tom McFadden. “Christendom’s campus is truly growing right now—it’s an exciting time.”

Expansion of the college’s physical plant began after it purchased new property to the east of the campus in the early months of 2013, with the completion of the Crusader Fields by that fall. The fields had their long-awaited opening in the spring of 2014, finally bringing home soccer and rugby games to Christendom’s campus.

The opening of the new business office continues Christendom’s recent expansion projects, which include plans for constructing a new Commons on campus, featuring a permanent dining hall and new classrooms for students. The main administration building, Regina Coeli Hall, will also be expanded to include an admissions office suite overlooking the Shenandoah River, with construction on a new faculty office building and an expansion of Christ the King Chapel expected in the future as well.