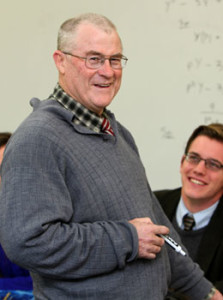 Christendom College recently announced the appointment of associate professor of mathematics and natural science Dr. Greg Townsend as vice president for academic affairs (VPAA). An associate professor at Christendom since 2002, Townsend was acting VPAA last fall before officially stepping into the position this spring, replacing Dr. Steven Snyder, who stepped down to allow more time to focus on teaching philosophy at Christendom.

“Dr. Snyder had such a positive impact on the academics at Christendom during his time, and I’m honored to continue his excellent work,” says Townsend.

Townsend has been hard at work in his new position, playing an integral part in the reintroduction of the mathematics major to Christendom for this coming spring semester. The reintroduction of the mathematics major is the first step in the college’s plan to expand the amount of math and natural science courses offered to their students, with the option for students to minor in physics coming fall 2015. 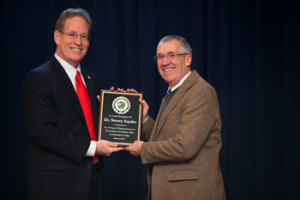 “This major is a great asset to the college’s many advantages, and not only remains true to the original hopes for the school, but also has a wide appeal to new families considering it,” college president Dr. Timothy O’Donnell said. “The major will further strengthen our excellent educational program—fulfilling the founders’ vision—and will have broad-based appeal to many of our constituents since mathematics is a key part of our modern world.”

Earning his Ph.D. in applied mathematics from the Victoria University of Wellington, New Zealand, Townsend has been an associate professor of mathematics and natural science at Christendom since 2002, helping to introduce a variety of math and science courses to the challenging liberal arts curriculum. He also holds a baccalaureate in Sacred Theology (S.T.B) from the Pontifical University of St. Thomas Aquinas (Angelicum) in Rome, as well as an M.A. in Religious Studies from the Notre Dame Catechetical Institute, now the Christendom College Graduate School.