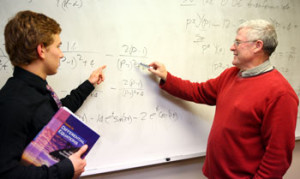 In a recent article in The State News, Jessica Sattler debunks one of academia’s biggest myths: liberal arts majors are destined for poverty and lack the prestige of other majors.

“English majors, in particular, are the butt of many jokes in popular culture, particularly in terms of what sort of employment awaits them after graduation. Flipping burgers is a popular choice for this type of banter,” she writes. “But it’s the English majors who are getting the last laugh.”

She explains that although popular opinion suggests that English degrees are useless, due to the lack of jobs that require an English degree as part of the job description, the reality is that an English major, and liberal arts majors in general, have an ability to surpass their peers in the area of communication, writing, critical thinking, formulating arguments, giving presentations, and all the other aspects of work for which employers are desperately searching.

“As college graduates emerge from their education without a clear grasp of basic spelling and grammar or communication skills, employers become increasingly frustrated. Additionally, a degree in engineering or mathematics may provide support for a potential employee’s intelligence, but says nothing about their interpersonal abilities,” she says.

“An English degree, or nearly any liberal arts degree, prepares an individual for critical thinking and analysis in their everyday lives. English majors are taught to formulate their arguments carefully and to have a clear basis for that argument. They can read a text and quickly summarize the main point, then draw conclusions and ask questions based on what they’ve read.”

Sattler continues to analyze unemployment rates, to establish whether an English major is really at that much of a disadvantage as popular opinion holds.

“According to the Council of Graduate Schools, the average unemployment rate for a recent college graduate in English from 2009-2010 was 9.2 percent,” she writes. “Recent graduates in mechanical engineering could expect an 8.6 percent rate, marketing graduates a 7.2 percent rate and economics graduates a 9.4 percent rate. Those gaps become even narrower if the English graduate has experience in their field.

Despite the fact that the reality shows that English and liberal arts majors are highly employable and sought after, Sattler believes that there’s still going to be prejudice against majoring in the liberal arts, even when there are many very successful people who have majored in English, such as Supreme Court Justice Clarence Thomas, journalist Barbara Walters, astronaut Sally Ride, comedian Joan Rivers, and politician Mitt Romney.

“But in a way, that’s a good thing,” she says. “English graduates are underestimated and fly below the radar, snatching up jobs their colleagues don’t have the skills for. So, relax, English majors. Take a deep breath. Nod and smile through the jokes at your expense. You aren’t the first to take this path, and you won’t be the last.”