Professor Marshner to Retire from Teaching 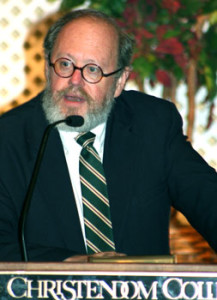 Dr. William Marshner, a founding member of the faculty of Christendom College and a professor in the department of theology is retiring from his teaching career at the college, effective following the spring semester of 2015.

“Dr. Marshner provided many years of great service to the college,” says college president Dr. Timothy O’Donnell. “Dr. Marshner was a founding member of the school…we owe [him] a great deal of gratitude.”

Marshner, a convert to the faith and an eminent Thomistic theologian, is a founding professor at Christendom College. He pursued his undergraduate studies at Gettysburg College, majoring in Greek. While pursuing a degree at the Yale graduate school, he studied Hebrew, Akkadian, Aramaic, and other Semitic languages. He earned an M.A. from the University of Dallas and his S.T.D. from the Pontifical John Paul II Institute at the Catholic University of America. Marshner has been published extensively in newspapers and academic journals, with his latest work, An Anti-Modernist Anthology, being released this year.