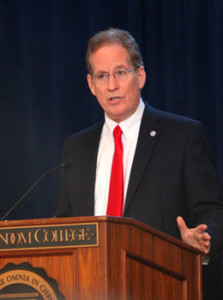 Christendom College began its spring semester of 2015 with a record enrollment, including a record number of newly admitted students to the college. College president Dr. Timothy O’Donnell made the announcement on Monday, January 19, during his opening of the semester address to the student body, where he called on the record 421 students to “dare to be great.”

“We are summoned here at Christendom to do great things, in our classes, student life, and in the routine moments of every day. You have a great destiny,” said O’Donnell. “Whether you’re an A, B, or C student, you’re all a part of something extraordinary here. Don’t settle for mediocrity, when Our Lord calls us to heavenly glory. If we all respond to the call to be fully alive, if we all dare to be great, then together we will have a great semester.”

The student body of 421 includes 19 new students for the spring semester—a group that includes transfers, re-admitted students, and first-time freshmen. At the end of the Fall 2014 semester, the college admissions office had budgeted a goal of 384 students for the spring semester of 2015. By bringing in a record number of students, and increasing retention rates between fall and spring semesters, the admissions office exceeded its goal by 10%, setting a record spring enrollment for Christendom.

“People want to be here at Christendom, to study, to live, to truly become great. This record spring enrollment reveals that,” says vice president of enrollment Tom McFadden. “The desire is stronger than ever right now to be here, rather than at other colleges in the world. College applications are up 20% for the fall, so these numbers will only continue to grow, and the college will as well.”

With the student body increasing in size, the college continues to increase in campus size as well as the new spring semester begins. A new admissions office suite, overlooking the Shenandoah River, is planned to begin construction this spring, along with new faculty office buildings, and a new commons building as well.

This news, announced by O’Donnell, comes in addition to the variety of exciting events coming to Christendom this spring, including famed intellectuals George Wiegel and Joseph Pearce for the college’s Major Speakers Series; the continuing ‘Life on Tap’ alumni networking series; and Bishop Paul Loverde, of the Diocese of Arlington, Va., and author Alice von Hildebrand coming to speak at this year’s graduation ceremonies.

These events complement the new initiatives being undertaken at the college as the new year begins, with the option of the mathematics major now available, and varsity softball coming to the college this spring. In terms of administrative changes, Dr. Greg Townsend takes over as vice president of academic affairs and Mr. Chris Vander Woude officially takes over as dean of students as well.