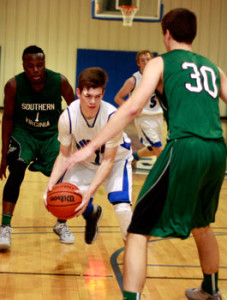 Crusader basketball returned with a vengeance this past week, with two great victories over the Knights of Southern Virginia University (SVA) on Tuesday, January 8. Each game was riveting, with the women’s team commanding the court, and the men’s team winning decisively in the final minutes of their game.

The Crusaders played a tight first half, trailing the Knights 50-47 at the half. In the second half, the Knights came out strong, pulling away to a fifteen-point lead. Led by sophomore Stephen Foeckler, the Crusaders then made an eighteen point run in six minutes, during which the Knights were only able to score two points. The two teams played even for the rest of the game, until the last two minutes, when the Crusaders were able to pull away to finish with a decisive victory, 93-82. This has been the highest scoring game for the Crusaders this season. With Foeckler leading in points, both he and sophomore Mike McMahon shot over 40% from the three-point line, finishing with 28 points and 23 points, respectively. Junior Joe McMahon led the team in rebounds, finishing the game with a solid double-double.