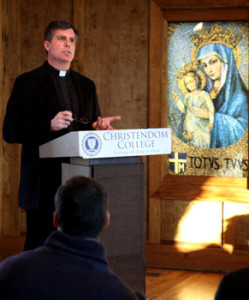 Renowned Thomistic scholar and author Fr. John Meconi, S.J., presented the annual St. Thomas Aquinas lecture at Christendom College this past Wednesday to nearly one hundred students, faculty, and staff members. Held every year on or around the feast of St. Thomas Aquinas (January 28), Fr. Meconi delivered a lecture entitled “The Augustinian Roots of Thomistic Deification”. The lecture, put on annually by Christendom’s department of philosophy, focused on St. Thomas’ appreciation of St. Augustine’s thought concerning man’s deification in Christ, in celebration of the great feast.

“The doctrine of deification, in which humans participate in divinity by Baptism, is a Thomistic doctrine that is strongly rooted in the thought of Augustine,” Fr. Meconi told the Christendom community. “According to both Church Fathers, we are able to do things only God can do by this participation, for, as Aquinas puts it, ‘the only-begotten Son of God, wanting to make us sharers in His divinity, assumed our nature, so that he, made man, might make men gods.’”

Presenting his lecture in four parts, Fr. Meconi explained that St. Augustine first wrote of the doctrine of deification over the course of his life—writings that St. Thomas would later draw from and then surpass in his own writings on the subject later.

“St. Thomas and St. Augustine had a very tight theological relationship — so tight that if one is to be a good Thomist, they must be a convicted Augustinian as well,” Fr. Meconi said. “The roots of St. Augustine are seen throughout the works of St. Thomas, but particularly in this doctrine of deification.”

Fr. Meconi went on to say that man was made in the Image of God, not perfectly but imperfectly. For this reason, there is a shared goal in every human life to become this perfect image. According to both St. Thomas and St. Augustine, such a goal can only be realized by those who decide to live their human lives in a divine manner.

“We have been saved from sin, and in Christ we can now communicate with God as a Father. We are something more than human now, thanks to the Holy Spirit coming down to us and making us ‘not just Christians…but Christ!’. Such is the beauty of the doctrine of deification, as written of by St. Thomas and St. Augustine before him. Even as you leave the holy soil of Christendom College, may you celebrate the thought of St. Thomas Aquinas through holy lives and holy study.”

Before concluding his talk, Fr. Meconi thanked the Christendom community for inviting him to speak on the feast of St. Thomas, saying “you keep the rest of the Catholic colleges of America in line.” A reception was held following the talk where students and faculty enjoyed discussing the topic further with Fr. Meconi.

Fr. Meconi teaches in the Department of Theological Studies at Saint Louis University, and is the editor of Homiletic and Pastoral Review. Most recently he published the Annotated Confessions of Saint Augustine (Ignatius Press, 2012), The One Christ: St. Augustine’s Theology of Deification (Catholic University of America Press, 2013), he has co-edited (along with Eleonore Stump) the Cambridge Companion to Augustine (2014); he is currently editing and translating the Patristic and Medieval Commentaries on the Psalms for Eerdman Press’ The Church’s Bible Series. Fr. Meconi is a former president of the Jesuit Philosophical Association, as well as a Fellow at the Augustinian Institute at Villanova University, and serves on the ecclesiastical board of Boston College’s School of Theology and Ministry, as well as the Saint Benedict Institute at Hope College in Holland, MI.

Throughout the year, Christendom College hosts many notable speakers, providing its students with exposure to some of the great Catholic thinkers of today.