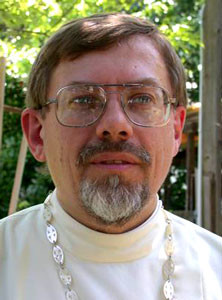 Renowned Byzantine priest and liturgist Fr. David E. Anderson will deliver a series of lectures at Christendom College beginning February 4, and concluding with a celebration of the Divine Byzantine Liturgy in Christ the King Chapel on February 7. A teacher and a translator of patristic and Byzantine liturgical texts, Fr. Anderson’s lectures are a part of Christendom’s Faith & Reason lecture series, and are open to the public.

Fr. Anderson’s lectures will focus on the liturgical traditions of the Eastern Churches, and will be delivered nightly in St. Thomas Aquinas Hall. The first lecture, entitled An Introduction to the Eastern Churches and Their Liturgical Traditions will be held on Wednesday, February 4, from 4:00-5:15 p.m.; his second lecture, The Words of Institution of the Eucharist, will occur on Thursday, February 6, from 6:30-7:45 p.m.; and his final, A Walk Through the Byzantine Divine Liturgy, will be held on Friday, February 6, from 4:00-5:15 p.m. Refreshments will be provided.

Fr. David E. Anderson, a priest of the Ukrainian Catholic Eparchy of Chicago, was born in 1953 in Jamestown, N.Y.  Educated at Wadhams Hall and St. Vladimir’s Seminary, where he was a student of Fr. Alexander Schmemann, he was ordained in 1983 and has served as a parish priest for 31 years, the last 15 of which have been at St. Peter’s Church in Ukiah, California.  From before his ordination until now, he has been both a teacher and a translator of patristic and Byzantine liturgical texts.  He is especially known in northern California for his lectures on the early Church Fathers and the early liturgy, presented in the (Latin Rite) dioceses of San Francisco, Santa Rosa, and Oakland, which have been the means by which many have been introduced to the Eastern Churches.  He also is an instructor of philosophy at Mendocino College in Ukiah.

The Faith & Reason lecture series was born of the spirit of Faith & Reason, the former academic journal of Christendom College. The mission of the journal and this series, hosted by the department of theology at Christendom, is to create an educated Catholic laity, a laity in love with all that is good, beautiful, and true.