President of Virginia Institute for Public Policy to Speak at Christendom 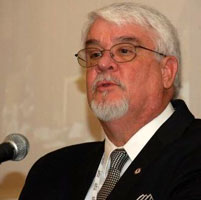 Noted political speaker and president of the Virginia Institute for Public Policy John Taylor will give a talk at Christendom College on February 9 at 1 p.m. in St. Thomas Aquinas Hall. Part of the spring semester’s politics practica speaker series, organized by the political science and economics department, the talk is open to all members of the Christendom community, and refreshments will be provided.

Taylor received his B.A. from Wofford College in 1975, before earning his M.B.A. from Georgia State University and a J.D. from the Woodrow Wilson College of Law. An elected member of the Mont Pelerin Society and the Philadelphia Society, Taylor has won multiple awards, such as the John Marshall Award, the Hero of the Taxpayer Award, and the Eagle Award, for his pro-family, grassroots leadership in his position. He is currently the president of both the Virginia Institute for Public Policy and Tertium Quids, a 501(c)4 issue advocacy organization. Named one of the most influential political players in Virginia by Campaigns & Elections, Taylor is also the producer of Freedom & Prosperity Radio, a syndicated talk radio program with a focus on politics and public policy.