Graduating Athletes Honored for their Commitment at Christendom 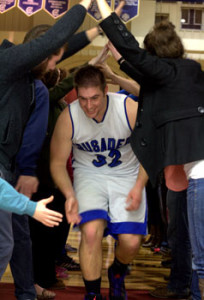 The Crusaders finished their basketball seasons at home this past week, with the fans at Crusader Gymnasium showing enormous appreciation for the players, and particularly the four seniors who were playing in their last home games.

On Tuesday, the women faced off against a talented lineup from Trinity University, and on Wednesday the men followed suit against Patrick Henry College. At both games, the stands were filled with faculty, staff, students, siblings, and parents as evidence to each player, and each senior, that their character and commitment to Christendom deserves a spotlight.

While the Lady Crusaders came up short by ten points, 43-53, it hardly felt like a defeat. They suffered a 30 point loss to Trinity University in the fall semester, and the Lady Crusaders were missing 2 of their 5 starters on the court.

After the game, seniors Clare Duda, Elizabeth Slaten, and Mary Barbale were recognized for their four years of hard work and commitment to Crusader Basketball. 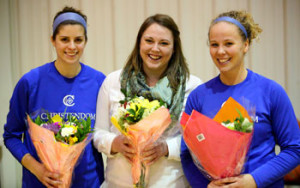 On the following night, the men’s team delivered a crushing 91-54 defeat to neighboring college Patrick Henry. At halftime, senior Micah Davis proudly received recognition from basketball coach  Chris Vander Woude, his teammates, and the packed bleachers for his service not only to the team but  to the entire athletic department. All heads nodded in agreement when Coach Vander Woude pointed out that everything Davis has done in his four years has been for his teammates or for the selfless service of others.

Both Crusader teams aim to feed off the energy of Senior Night and the intensity of their senior leaders as they roll into the final few games of their season.