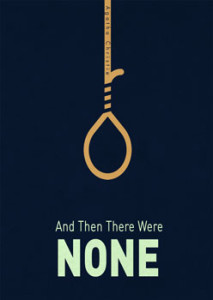 The Christendom College Players will be performing the thrilling mystery And Then There Were None this spring. A stage adaption of Agatha Christie’s legendary thriller, the play will include a young, fresh cast of students who will be joining other Christendom acting veterans, and will be directed by alumni Andrew Clark (’14) and Mary Harrington (’11). The play will be performed April 24-26, and all are invited to attend.

Widely considered to be Agatha Christie’s greatest work, And Then There Were None is a mystery, centered on ten people who are enticed into coming to a mysterious island under different circumstances. All have been complicit in murder, but all have either escaped justice or committed an act that was not subject to legal sanction. Shortly after their arrival, things take a turn for the worse for the guests, and each faces punishment for their past crimes.

Andrew Clark, a history major from the class of 2014, is excited to be returning to the Christendom Players as co-director with alumna Mary Harrington, bringing a wealth of past theatrical experience to the production.

“The students here come from such a variety of different backgrounds, and make these productions such a wonderful complement to the rest of the liberal arts experience at Christendom,” says Clark. “Mary Harrington and I are thrilled to be returning to direct a Christendom play. Both of us acted when we were Christendom undergrads and we are more than happy to give back to the drama community that gave us so much. The cast is a fairly young one, with a lot of freshman and sophomores — something that bodes well for the future of the Christendom Players.”

Every year the Christendom Players produce two plays, one in the fall and one in the spring. While Christendom does not have a drama department, students from across all disciplines are welcome to audition for the performances, making Christendom’s liberal arts experience rich in  the fine arts as well. To find our more about the fine arts at Christendom, please visit here.