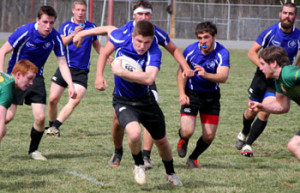 The excitement and suspense of Christendom rugby returns to campus this spring, with a varsity team nearly double the size of last year’s victorious team. Looking to emulate past winning seasons, particularly 2013’s record-setting undefeated season, ever-popular Crusader rugby will play in two prestigious tournaments this spring, in addition to two away games and two home games on Christendom’s own Crusader Athletic Fields.

The Crusaders already began their season strongly last semester, winning the Collegiate Men’s Division Plate at the New York Seven’s Rugby Tournament, the largest and oldest Sevens tournament in the nation. Looking to carry the energy from that historic win into the spring, the team is bolstered with fresh, young players this year, with 11 freshmen joining a team that already includes 12 sophomores, 8 juniors, and 9 seniors.

“We’re looking great going into this season. We may have lost a few of our best players after last season, but the amount of new players joining the team has really strengthened us,” said senior Bobby Crnkovich. “Our scrum is light, but our forward pack is very strong.”

A three-year veteran of the game, Crnkovich has watched the team grow and improve dramatically over time.

“We’ve come a long way since my freshman year,” he said. “We’re able to switch to an even faster-paced game this year, making it even more exciting for us to play, and hopefully more exciting for our fans to watch.”

Looking ahead, the Crusader rugby team will play their home opener on March 21 against Mount St. Mary’s University, before competing in the Cherry Blossom Tournament in Washington D.C. on March 28, and the Jeff Hewitt Memorial Collegiate Cup in Pittsburgh on April 11. The highlight of the season will come on April 18 when the Crusaders take on Division II rival the Franciscan University of Steubenville Barons in the annual Shield Match, held this year in Steubenville, Ohio. The Crusaders will finish their season with a home game against the Lions of Lord Fairfax Community College on April 25.