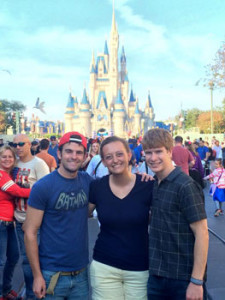 Christendom alumni Sean LaRochelle (’14), Marilyn Charba (’14), and Zach Smith (’14) recently completed internships with the Walt Disney Company, discovering that their liberal arts educations enabled them to thrive at one of the world’s largest corporations.  The analytical, communication, and social skills they learned at Christendom helped them stand out and receive recognition from managers and their peers, even amongst a cast of 66,000 other fellow employees.

“The classes you take at Christendom, the sports you participate in, the extra-curriculars, the moments of everyday life — everything I learned while at Christendom helped me to not only compete at Disney, but to really thrive,” says LaRochelle of the experience.

LaRochelle, Charba, and Smith all took part in the Disney College Program, a highly competitive internship where current or recently graduated college students are selected to work for the Walt Disney Company for either a 5 or 9-month program.

While other college students from all over the world, including New Zealand, Japan, and Germany, competed for selection in the program, the liberal arts education from Christendom more than adequately prepared the 2014 alumni to succeed, according to Charba.

“Disney is one of the biggest name-brands in the world — everyone knows about it. People may think that the small size of Christendom puts you at a disadvantage in terms of succeeding in a giant corporation like Disney, or Apple, or Google, but I guarantee you it doesn’t,” Charba says.

Each found themselves trained at dozens of different positions at their work locations during the internship, where they coordinated with large teams to ensure the satisfaction and safety of thousands of guests on a daily basis. All three alumni were not only singled out by guests, peers, and managers for their consistently strong work ethic in these positions, but also for the happiness they brought to their respective work-places during their internships as well.

“I was able to be a witness to what true happiness actually is, thanks to extraordinary spiritual life to which Christendom exposed me. That’s saying something when you’re working at supposedly the ‘happiest place on earth’,” says Smith.

With their internships completed, LaRochelle, Charba, and Smith have taken their liberal arts degrees, and bolstered resumes, and applied them to new employment opportunities. LaRochelle is now a project manager for an engineering firm in California while waiting to attend graduate school, while both Charba and Smith are now staff members at Christendom College, as Female Residence Director and Public Relations Specialist respectively.

Christendom alumni are involved in just about every field possible. To find out more about how a liberal arts education has helped graduates find success after leaving college, please visit our alumni page.