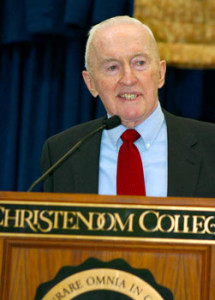 Dr. Charles E. Rice, who served as an Advisor to the Board at Christendom College, passed away this past Wednesday, February 25. A professor of law, Catholic apologist, and author of numerous books, Rice was a great friend of Christendom College, and eloquently delivered the college’s 2010 commencement speech, in which he referred to Christendom as a “superbly Catholic college.” He died at the age of 83, leaving behind a legacy as a true champion of Catholic higher education.

“Charles Rice was a great man and an extraordinary Catholic. Throughout his life he was a staunch defender of the Catholic Church, which he loved, and a faithful servant of Jesus Christ in every facet of his life, from the raising of his family to the teaching of law at the University of Notre Dame,” says Dr. Timothy O’Donnell, president of Christendom College. “Charlie was a great friend and supporter of the work of Christendom College. He served on the College’s advisory board and was the recipient of our Pro Deo et Patria Award. His passing is a great loss for all of the Church, the nation, and us. It truly is an end of an era.  We thank Almighty God for the gift of his life and pray for him. Requiescat in pace.”

Born in 1931, Rice received his B.A. degree from the College of the Holy Cross, his J.D. from Boston College Law School and his LL.M. and J.S.D. from New York University. He served in the United States Marine Corps, before practicing law in New York City. He joined the faculty of the University of Notre Dame in 1969, and was professor emeritus there until his death.

From 1981 to 1993, Rice was a member of the Education Appeal Board of the U.S. Department of Education, and served as a consultant to the U.S. Commission on Civil Rights and to various Congressional committees on constitutional issues.

He was a renowned author and Catholic apologist as well, writing such works as Freedom of Association; The Supreme Court and Public Prayer, The Vanishing Right to Live; Authority and Rebellion; Beyond Abortion: The Theory and Practice of the Secular State; No Exception: A Pro-Life Imperative; Where Did I Come From? Where Am I Going? How Do I Get There?, and What Happened to Notre Dame?.

A native of Mishawaka, Indiana, Rice leaves behind his wife Mary, 10 children, and 41 grandchildren.