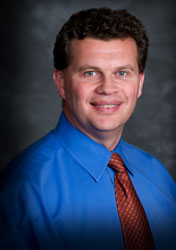 The Honorable Tim Taylor, Mayor of Strasburg, Virginia, spoke to Christendom students this past Monday, March 23, as part of the college’s politics practica speaker series.  A twice-elected mayor and a seven-year veteran of the Strasburg Town Council, Taylor encouraged students to become involved in local politics and public policy, and related the value of a liberal arts education in an administrative career.

Taylor, who also serves as the Instructional Technology Supervisor for Shenandoah County Public Schools, began by speaking about his own experience in public policy. He told students about his ability to get elected into small-town administration through not only his education, but through his previous experience in the town of Strasburg as well. He received a degree in education from James Madison University, but his degree was not the sole reason for his appointment to the town council.

“A good way to get begin getting involved in public policy is to go back to where one is from,” he told the students. “It is easier to establish a trust relationship with voters in your own hometown, because people know you and recognize your name.”
Following on this point, Taylor stressed the importance of making oneself known in a small community. “You can’t hide from the people. You have to serve and give back to the community. Whether that’s volunteering in your church or working with a local organization. Even if you are already involved in the small-town administration, it is crucial to make the time to personally reach out to the people.”

The mayor encouraged students to get involved in local town governments while still in college, such as in the nearby towns of Front Royal and Strasburg. Strasburg, like Front Royal, is a small town with close proximity to the college. In years past, students have been given the opportunity to serve in summer internships for the town council in order to understand more closely how a small-town administration is run.

“No specialized education is really needed in this kind of career,” he explained. “One should be a diverse, well-rounded person — something that a liberal arts education is well-suited for. A liberal arts education is great if one is planning to get involved in their town’s administration, because those with it have been given the ability to communicate effectively, and will be able to see the citizens’ side of problems,” he advised.

In conclusion, Taylor emphasized the importance of being able to reason and explain policies to a community.

“If my opinion differs from the majority of the citizens, then it is my job to educate them. I have to give reasons for my beliefs. That ability to reason effectively is something you’re learning here, right now — this is why education and public policy must go hand in hand.”