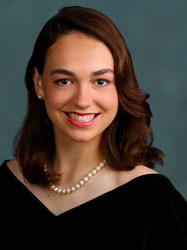 Cermak, a student at Oakcrest School in McLean, Va., is a Commended Student in the 2015 National Merit Scholarship competition, and is very active in her school, including the pro-life group, many theatre productions, choir, and as co-captain of the tennis team. She has been a Pure Fashion model, involved in youth ministry and civic activities, and is a top contender for valedictorian of her graduating class this year.

According to Cermak, the idea of gaining a classical liberal arts education is very appealing to her – and that is what is drawing her to Christendom.

“There is something about the liberal arts that sets its students apart as free men and women. They have a breadth of knowledge that allows them to tackle all disciplines, and at the same time they have a depth of understanding that allows them to think critically, solve problems, and come to their own conclusions. They can defend their beliefs and actions with wisdom outside themselves, because they know the history of Western thought and the origins of the society around them,” she says.

Reyes is a senior at Seton School in Manassas, Va., and is no stranger to Christendom College.  His father, Dr. Jonathan Reyes, once served as a history professor and vice president for academic affairs at the college, so Reyes spent quite a bit of time on campus when he was much younger.  Reyes is also very involved in his school’s activities, playing on the varsity soccer team and running varsity track, among other things. He plans to major in math and then pursue his interest in engineering.

“I intend to pursue a post-graduate degree in aerospace engineering. This will likely require me to continue my education after Christendom College, but I believe that my liberal arts education will help me to become a better engineer. By studying the liberal arts at Christendom, I will learn critical thinking, problem-solving, teamwork, and public speaking skills. These are talents that would be much harder to develop by only studying math and science courses in college. I will be able to apply such skills to an engineering career, and even if I choose to pursue a different career, these skills will be indispensable,” he says.

Reyes also points out that, even if he were to become an engineer, that would not be enough to find success in his field, because the best jobs in engineering go to the best leaders.

“I hope that these skills gained through my liberal arts education will make me a strong leader,” he says. “The high positions in engineering organizations are reserved not for the most proficient engineers, but for the best leaders. Extensive technical knowledge is required for these positions, but leadership skills are equally important. By enrolling in Christendom’s new math major, I will learn leadership skills and simultaneously gain a technical foundation on which I could build through my post-graduate studies.”

Both of these winners will join an impressive group of students this fall when they arrive as freshmen.  Currently, students from 33 U.S. States and Canada comprise the freshman class, with an average SAT score of 1835.