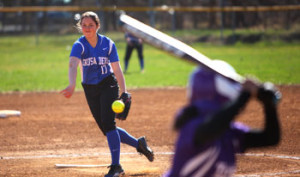 A shutout from sophomore pitcher Mary Solitario helped earn the Christendom Crusaders their first of two wins this past Monday in their home opener, beating Washington DC’s Trinity University in an exciting doubleheader. Led by a formidable offense and an on-fire Solitario on the mound, the recently reintroduced women’s softball team played exceptionally well in front of a packed crowd of Christendom fans.

Solitario had a stellar performance, pitching a no-hitter with fourteen strikeouts in the first game. The offense showed up in force as well, with sophomore Mary Arnold leading the team offensively, getting five hits, knocking in three RBI’s, and scoring four runs. With their offense, and defense playing at their best for a roaring crowd, the Crusaders finished with a score of 23-0 over Trinity in the first game of the doubleheader.

The Crusaders kept their momentum going in the second game, again defeating Trinity 21-1. Solitario continued her incredible afternoon on the mound, pitching another excellent game with eleven strikeouts.  The Crusaders defense stayed strong behind Solitario throughout the game as well, allowing just one run on four hits by Trinity.

After winning both games of this double header, the Crusaders look to keep this streak going when they play against the University of Valley Forge at their field after Easer break.