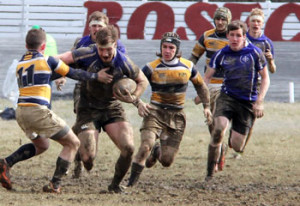 The Crusaders made their second appearance in the annual Cherry Blossom Rugby Tournament in Washington D.C. on March 28. Coming off an impressive come-back victory against Mount St. Mary’s University at home earlier in the season, the Crusaders finished second in their bracket for the tournament, continuing their remarkable start to this season.

Bolstered by the Christendom fans that journeyed with them to the game, the Crusaders first played the much larger U.S. Merchant Marine Academy team, King’s Point.  The Crusaders put up an extraordinary fight throughout the game, only coming up short in the last five minutes by 3 points, due to questionable referee calls. Even with a 12-15 loss, the Crusaders continued on into the tournament, determined to overcome this first defeat of the season.

Due to their high level of play, the Crusaders were seeded first and given a ‘bye’ into the semi-finals.  Unfortunately, the competition was called off due to icy conditions on the field, but the team left feeling proud of their performance on Saturday.

The Crusaders look to continue their fierce season on April 11, in the Jeff Hewitt Memorial Collegiate Cup Tournament in Pittsburgh, Pa.