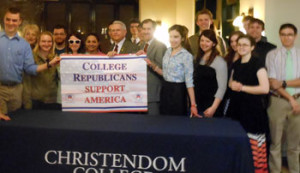 Organized by the College Republicans, a student-run organization, Black and Berg spoke on American ideals, and the need to fight the denigration of these values in our modern culture.

As an M.D. since 1987, Delegate Berg discovered many of the burdens the “politics of medicine” was placing on the practice.  When he retired in 2008, he concentrated on medical-political issues, such as fighting the 2,700-page Affordable Care Act (Obamacare), which he has read.  Berg recognized the decline in moral values both in medical questions, such as the contraceptive coverage provided in Obamacare, and issues all across the political spectrum.  As Ronald Reagan said, “as government expands, liberty contracts.”

“Unrestrained growth of government disconnects people from a higher moral calling,” Berg said.  “The tax code forces a citizen to lose either his moral sense or his respect for law.  Both are happening.”

Berg asserted that we cannot tolerate the denigration of our values, but must always keep a moral compass as a guide.

Senator Black spoke next, relating his experiences from the Marines, to family and upbringing.  He enlisted in the Marines in 1963 and received a purple heart when wounded in Vietnam.   After earning a law degree from the University of Florida in 1976, Black became a major in the U.S. Army Judge Advocate General’s Corps (JAG).

Black recalled his days under Reagan while he was with the JAG, how “everyday you’d open the paper and there’d be another good, decent thing.”

“By moral force of Reagan’s personality and the people he put in place, things happened at a wonderful pace,” Black said.  “If you have a small group of passionately dedicated people, you can really change things.  I call this the ‘Law of Small Numbers.’”

Black himself has plenty of experience in this “law,” fighting not only in Vietnam, but also battling against President Clinton’s moves in the Pentagon and later against tax bills in Virginia.

Senator Black concluded by focusing on family and good upbringing, urging everyone to recognize the Faith as our greatest gift.

“There is no greater blessing than the gift of the Faith,” he said.  “It’s something to pass on when you have children.  If you have ten kids and 100 grandchildren, you’re 100 times more powerful.”