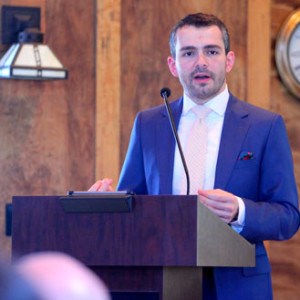 The Heritage Foundation’s Dr. Ryan T. Anderson presented a talk titled “What is the Future of Marriage” at Christendom College on April 7. The co-author of What is Marriage? Man and Woman: A Defense,  Anderson spoke on the future of marriage in the United States, and how it ultimately relates to the timely, and important, question of religious liberty in our modern times.

One of the most sought-after speakers on the subject of marriage and religious liberty today, Anderson began by first presenting the two definitions of marriage in today’s culture, and made it clear that there is no “neutral ground” between them.

Anderson concluded that marriage equality advocates essentially believe that “marriage is between two adults who have consented to love each other, established either by priority or an intensity of emotion.”  In other words, for these advocates, marriage is about establishing your number one person.  According to Anderson, this philosophy of marriage simply fits marriage wrong in that it doesn’t explain marital norms, or the reason why the government is involved in marriages in the first place.

The alternative is a definition of marriage based on the theory of natural law.  Anderson compared marriage to a community.

“In Aristotle’s philosophy, there are three things which characterize any community: the actions of the community, the goods which the community seeks, and how that community is governed,” he explained.  The procreative act of marriage unites the spouses in all levels of personhood.  The comprehensive good sought is the creation and rearing of a new life.  As such, the norms established involve a comprehensive commitment, characterized by permanence, exclusivity, and monogamy.

This is a particularly revealing fact for the nature of marriage: it is ordered to making fathers and mothers, who seek the open-ended good of creating and raising human life.

“This understanding of marriage is not unique to Thomistic jargon or Catholicism.  This concept has been explained in every culture, only in different vocabulary and within a different cultural framework.  This means there is something natural which marriage corresponds to, and which every culture has at one point tried to explain,” Anderson said.

“These statistics are very well-established,” he continued.  “With the rise of broken families, there has been a corresponding rise in crime, and decrease in employment.  As the marriage culture fell apart, welfare took off, and the police state grew.  If you care about social justice or freedom, these problems are best solved by a healthy marriage culture.”

He then outlined the significant consequences of redefining marriage.

“The major consequence will be that no institution will hold the ideal that every child deserves a father and mother,” Anderson said.  “Marriage no longer tries to be a permanent institution now: forty percent of all Americans are now born to single mothers.”

Moreover, the redefinition of marriage means there will be no limit to what will be allowed in marriage.  If same sex marriage is allowed, why not the three person union called the “thrupple?”

“Once the foundation of sexual complementarity is removed from marriage, the norms of marriage will be removed too; and there will be no longer be a stopping point or limiting principle to marriage,” Anderson said.

The talk was sponsored by the college’s Cincinnatus League, a weekly political philosophy discussion group, and the Intercollegiate Studies Institute.

Anderson earned his B.A. from Princeton University, graduating magna cum laude. Before becoming a well-known voice in the political realm, he earned his doctoral degree in political philosophy from the University of Notre Dame, where he received his master’s degree as well. A regular guest on CNN, Fox News, MSNBC, and in print publications such as The New York Times and The Wall Street Journal,  Anderson is also the co-author of the acclaimed book What is Marriage? Man and Woman: A Defense, which Supreme Court Justice Samuel Alito cited in his dissenting opinion in the Supreme Court Case US vs. Windsor, involving the Defense of Marriage Act.